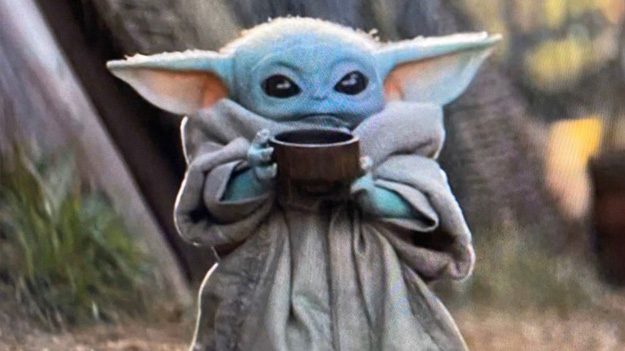 The new
Disney`s show named «The Mandalorian» did give the Star Wars fans more reasons
to be happy. There was first introduced a new character Baby Yoda, the 50 years
old alien who unexpectedly appeared in the last moments of the first episode of
the Star Wars spinoff. It quickly became a new favorite meme in social media:
you can find lots of adorable pictures of a cute little creature on Twitter or
Facebook including the memes, gifs and funny videos. There are even individual
accounts dedicated specifically to the Baby Yoda brand with new memes published
there every day.

When the Internet goes crazy about something, there are not only those who like it but also cynics who «express their maturity».  This is treated as intellectual seriousness but in fact, they just don`t understand such kind of affection. While there is the whole army of fans would dive for the little green cherub, Baby Yoda backlash has already started. But we would not take that bait.

Indeed,
there are some good reasons to be suspicious of this character: first, it is a
well-thought marketing move as Disney will have another source of toy income
for this holiday season. However, you should remember that T-shirts, toys, cups
and other merch was created for all Star Wars characters not depending on its
level of adorableness. So even if Disney did not present official items in the
stores, they would nevertheless appear on the black market.

The
Universe of Star Wars even has a list of characters according to their
cuteness. For example, Jar Jar Binks takes one of the last places as it is an
ugly rabbit-frog which the movie would be better off or porgs that absolutely
do not need to exist except for hiding puffin infiltration. Ewoks love or hate
is a meme already although the main reason not to like them is too much
fluffiness and not sticking to original seriousness of the trilogy.  Ewoks did play an important role in helping the
rebels conquer the Empire`s base but do they really distract viewers more than
C-3PO? Or maybe people just hate them because they cannot admit loving them in
fact.

We should
not compare Baby Yoda with ewokes as it hurts everyone whoever invested in Star
Wars. Something is nagging and even grouchy in fighting against something that
everybody likes just because everybody likes it: it seems like grownups poo-poo
anything teenage girls do because they think it may taint art somehow. Remember
what adult Yoda says: anger is hate, hate is suffering. People do love Baby
Yoda but accusing Disney and The Mandalorian show of making it so cute is the
same that accusing a chef of preparing a great meal by salting it.

Baby Yoda has done almost nothing in the Mandalorian except for floating in an egg-cradle, eating, napping, and using the Force to help to kill a beast and steal the baby. Despite this fact, Baby Yoda is so lovable that it becomes proof of designers` and storytellers` powers. As a rule, the creation of adorable characters lover by all people is a ticket to Try-Hardsville (there are many commercials featuring cute little creatures that became successful) but Baby Yoda is different. Baby Yoda being is a mix of the favorite Star Wars character and a superbaby. You adore its innocent cute gremlin face, even more, when you think about wise Yoda visage: Baby Yoda easily gets the first place over Baby Groot as the best baby character. That is why Internet common obsession with Baby Yoda was meant to happen and you should love it and enjoy things: this is totally okay.

Check out others interesting articles:

Place an Order with Rush Essay and Leave Your Homework to Pros!

Get 10% off your first order. Discount code: gift10